...of two rivers, the Lot and the Truyère, between Gorges and Valleys, equidistant  from Conques and Aubrac, Entraygues is located at 50km from Aurillac and 60km from Rodez.
At 230m in height, the climate is favourable to a very sweet and pleasant way of living...

From whichever direction you come from, by charming routes that linger, you will always arrive in Entraygues. And such a reward - the beauty of the place amazes us! The town of numerous Medieval vestiges, nestled between the waters of the Lot and the Truyère, offers us its old streets, lanes, tiny yards, narrow alleys, superb Tudor type houses dating from the 15th and 16th centuries, its castle and its 13th century bridges...

At the confluence of the Lot and the Truyère, between the waters as indicates its name, Entraygues would have been built in the middle of the 10th century.

Documentation available at the Tourist Office

Route with 21 numbered signs along the circuit which starts from the Tourist Office.
Download "Visiting the Old Town" 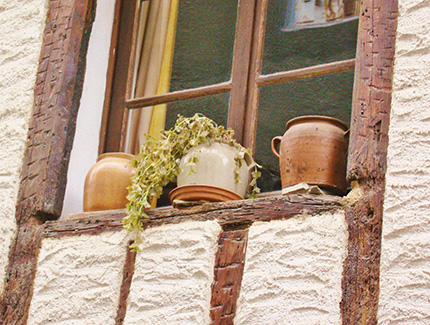 The village centre kept its Medieval streets, houses dating from the 15th and 17th centuries, some half-timbered and corbelled.

The back of the houses of the current City Tour, built during the 19th century are based on the old and solid fortified town wall.

The castle and the town battlements

The castle was built by Henry II, Count of Rodez, between 1278 and 1290. The first conurbation must have been at St-Georges (remains an old,  Gothic style edifice, far more important when it was a parish church, on a terrace).

From the end of the construction of the fortifed castle, in 1290, the town battlements were built with crenels, defence towers and front doors (there would have been a drawbridge on each side), the whole surrounded by moats.

Entraygues was a strategic point at the crossroads of transportation routes, at the junction of Auvergne and the Lot Valley.

The castle was looted and detroyed in 1587. Partially razed in 1604, it was rebuilt in the 17th century by Henri de Monvallat, the new lord of Entraygues. From the 13th century, only remain the two towers, the stairwell, the left vaulted room of the ground floor...
From the fortifications, only remain some sections of the castle's outer wall, front doors of which archways have been removed in the 19th century during the construction of the new church partly inaugurated on October 24th 1866. Most of the old round towers were removed  then and their stones were used to build the religious edifice.

The church from the end of the 19th century is simple and pared-down.
On the side aisles, near the altar of the Virgin, on a pillar, a slab can be found in memory of Déodat de Laparra, great benefactor of Entraygues.

The Chuch History :
The chapel was built thanks to Déodat de Laparra's legacy and became, in 1680, a parish church. It was rebuilt in 1860, almost at the same location, with a different orientation.
The church has been restored in 1960.
Organ bought at St Maur des fossés in 2011. Inaugurated on May 11th 2014.
A rose on the facade restored at the beginning of 2015. 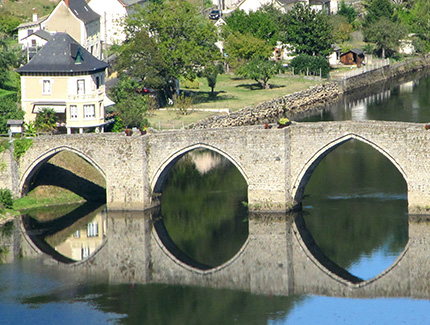 Gothic bridge over the Truyère

Listed historical monument, it was built by the pontiff brothers, by no means monks, but who were members of congregations and assigned with the mission of building bridges. It included a toll tower on each extremity and until the beginning of the 20th century, merchants and door-to-door salespersons were staying in the shelters to present their merchandise to the bystanders. In the old days, it resisted to the terrible and successive floods ! 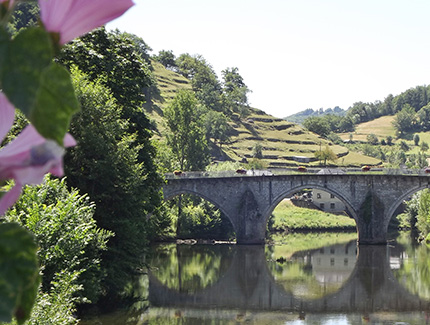 Built at the end of the 13th century, the Count of Armagnac closed it in 1388 (at the same time as for the bridge in Espalion) in order to prevent to much passage on the road.
The Bridge of Olt seems to have suffered more from the freaks of the river than the Bridge of the Truyère. The list of the numerous known repairs, this bridge was the subject of, should demonstrate the importance of the restoration for this edifice. It was in particular repaired  in 1524 and in 1680 (at the same time as the bridge of the Truyère).

Located at the South-East entrance of Entraygues, at the confluence of the stream Estampe and of the Lot, it dates from 1097. This little sanctuary is composed of two buildings. The smallest, first for seclusion or hermitage, later dedicated to Notre Dame, is the original edifice. Extended in 1679, the chapel became the convent of the Ursulines (three nuns lived above). Shortly afterwards, the friary of the Pénitents noirs  de la Croix (black Penitents of the Cross) replaced them until the beginning of the 20th century. The original chapel was restored in 1960 and the chapel of Pénitents in 1990. 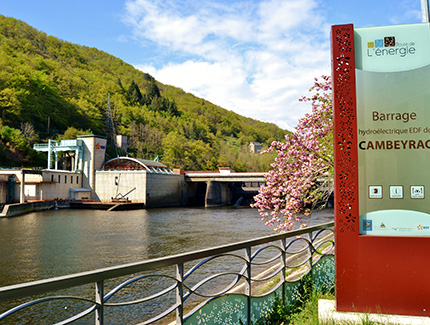 The hydroelectric development of Cambeyrac has been the last one built on the Truyère before the river joins the Lot in Entraygues-sur-Truyère.
It is composed of a dam and a power plant located in line with it.
Its role is to produce the first of the renewable energies, the hydroelectricity, to smooth and regulate the flow of the river on the downstream of the dam.
Located at the entrance of Entraygues, ahead of the 13th century bridge which spans the Truyère, this site has been built between 1954 and 1957.