At the confluence ...of two rivers, the Lot and the Truyère, between Gorges and Valleys, equidistant from Conques and Aubrac, the locality of Entraygues, situated in North Aveyron at the turn of three densely-wooded valleys where emerge rocky crests overlooking deep gorges, flirts also with Cantal and Auvergne. You will discover its diversity through villages where roofs tiled with grey ‘lauzes' have retained a true authenticity: Le Fel and its church of Roussy - Espeyrac and Golinhac on the path of Saint Jacques de Compostelle - Pons with its sundial and market-gardens - St Hippolyte and Rouens overlooking the site of Valon - Couesques and its dam. 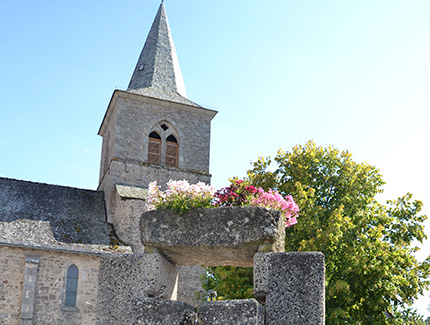 At 12 km from Entraygues, Espeyrac is mentionned in the cartulary of Conques since the 11th century. It, thus, must have depended on this abbey. The village had two castles. From the one belonging to the Espeyrac lords, subsists a building with a turret.

The church is located on the other one. Formerly, and still nowadays, it is a stop-off village on the pathway of St Jacques de Compostelle leading towards Conques. Two pretty stone crosses at the entrance of a peaceful village. A pleasant site at the heart of the picturesque valley of la Daze : trouts river which joins the Lot 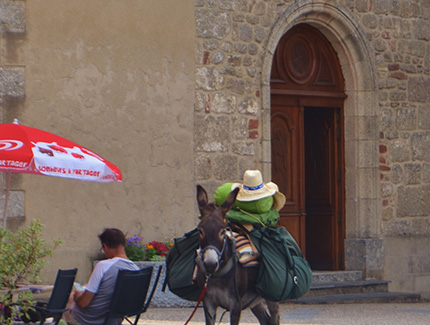 A stop-off village on the pathway of St Jacques de Compostelle, Golinhac is located on the left bank of the Lot and overlooks the deep gorges of this river.

In the village centre, the elaborated cross of the pilgrims of St Jacques de Compostelle (shell at the extremities) from the 15th century. Near the village, at 684 m of altitude, le ‘Puech de Régault' (the hill of the look) offers a magnificent panorama on the valley of Entraygues, of la Viadène, the Monts of Aubrac and of Auvergne with the Plomb du Cantal. In this place has been built in 1948, a santuary at N.D des Hauteurs (viewpoint indicator). Nearby, the menhir of 'Peyre Bélieyre'. At a few kilometers, Castailhac, second village of the municipality (Gothic church from the 15th century). The castle of Vernhettes, built in 1654, has a domestic chapel separated from the main building.

Discover the heritage of the municiplaity of Golinhac by downloading here 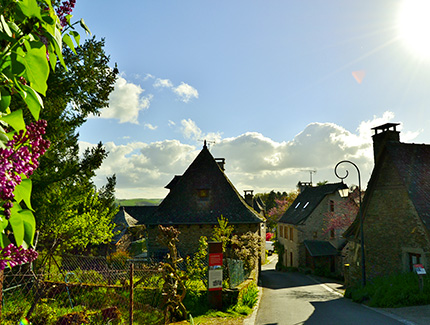 Located at 10km of Entraygues, Le Fel is a flowery village built on a crest which preserved a small tower, the vestige of a castle, and wine-growers' little houses prettily restored. A very beautiful panorama on the Lot Valley and on the vineyard terraces. In the past, this village only made a living on vineyards, from which the wine very renowned (red) was already famous on the years 902/909. The current production (Mousset and Abeil) got the designation VDQS (label guaranteeing quality of wine) since 1965 and AOC (=PDO) since May 2011.

To do : a discovery circuit  « a village, a vineyard » starting from the townhall 1,5km of visit across the vineyards and this pretty panoramic and relaxing village. 40 interpretative signs to know everything about this vineyard, its origins, the village, its customs and traditions, the yesteryears life, the wildlife, the plants...

Roussy and its church also called « the chuch of horizons » was started in 1867 and was finished in 1884, at the very top of a peak. Beautiful viewpoint.
Crestes, old village and its chapel from 1636. 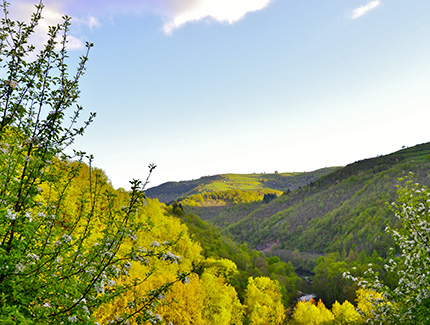 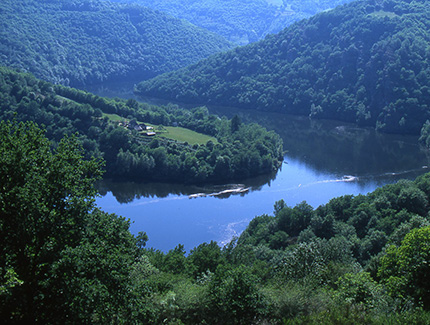 This municipality shows a hilly area (altitudes from 268m to 783m), from which the main structure is constituted by a central plateau going down in steep slopes towards the Truyère and the Goul. 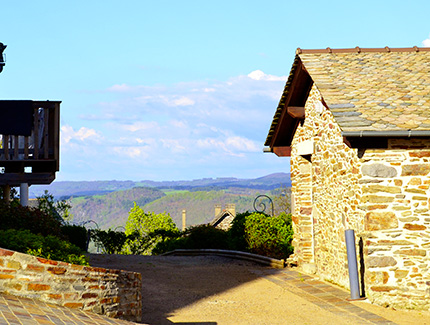 St-Hippolyte
In 1790, during the creation of the department Aveyron, Saint-Hippolyte became the administrative centre and place of jurisdiction of the municipalities and parishes of Pons, Lacroix-Barrez, Bars, Valon et Murols. This cantonal district was, then, composed of 3765 inhabitants. The whole has, afterwards, been dismembered between Entraygues and Mur-de-Barrez in January 1801.
Administrative centre of the current municipality, flowery and mountainous village, located at 12km of Entraygues and 17km of Mur-de-Barrez with beautiful viewpoints on the gorges of the Truyère and on the castle of Valon. Typical church with its comb bell tower. The construction of the current building dates back from the 15th century. In 1780, the main production of this plateau was ovines farming, reputed for their wool. In the steep slopes, the culture of sweet chestnuts prevailed. The sunny sides, below 500m, was kept for the cultivation of vineyards.

Rouens (at 14 km)
Come in this flowery and mountainous village, panoramic viewpoint on the gorges of Truyère and on the castle of Valon. Church and chapel dedicated to Notre Dame, built in 1797, beautiful classified altarpiece from the 18th century. Castle of Rouens of which the foundations are from the 13th century and oven of the village restored with its internal vault made from local stones.

Couesques (at 6 km)
Located at 6km from Entraygues, at the confluence of the Truyère and the Goul near the dam which has the same name. Bridge built at the beginning of the 20th century of which the main archway overlooks the confluence at a height of 35m. The importance of the EDF site of Couesques dates back to 1945. This provisional city sheltered about a thousand people, during the construction of the dam and of the factory, as well as the Escalafron lake on the Goul. 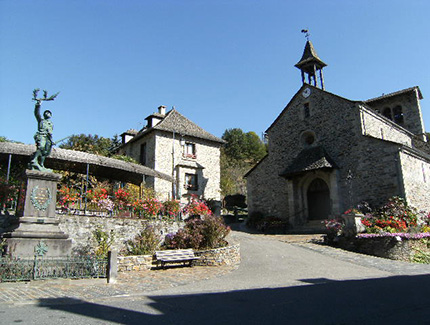 Pons (at 10 km)
Take a detour through this flowery village and noteworthy for its schist, sloping rooves and their dormer windows. The current church is from the 15th century (beautiful altarpiece and popular statue of St Roch from the 16/17th centuries following after the plague epidemic). See its clock and sundial. Pons is the land of greengrocers (coustoubis or castanhaires), fruits, and vegetables. Dam of the Goul. Pretty and old-style house in the hamlet la Rivière.